They formed a small group: one screaming voodoo with the back of his head unzipped, one gentleman wearing his black felt hat and swinging his walking cane while "singing in the rain", a two-head monster limping in a large furry coat, a pirate girl, her wild and exotic beauty enhanced by her tattered clothes and her unkempt tresses, a true disorderly band seeking to exchange tricks for some worldly treats. 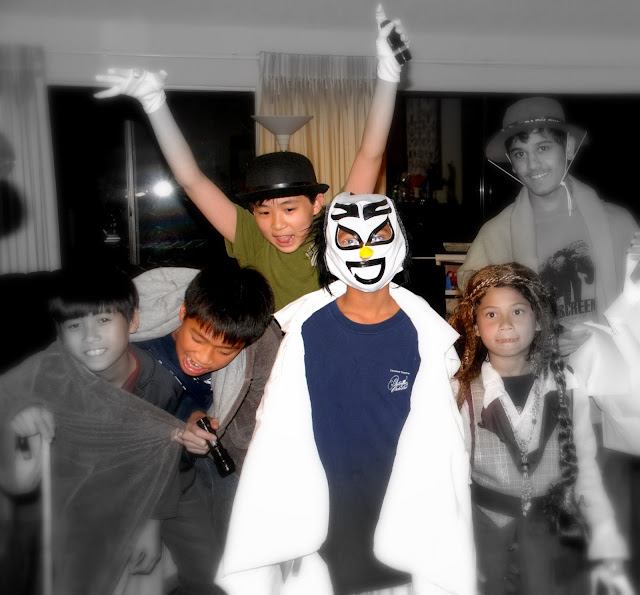 They charged down the street in exhilaration, following the retreating bright moon westward, knocking on all the doors with a welcoming porch light. But the light was a long ago convention that had long been abandoned by this dead town. Behind each door is only darkness and silence. The souls that inhabit these houses are not accustomed to the idea of strangers knocking at their door in the dead of night. The spirits that dwell in these well-guarded houses are mistrusted and solemn, estranged from the wanton spirits roaming outside under the bright moonlight.

The small rattag group persisted on walking up the small steps from the dark street to the lighted porch, keeping the tradition alive, hopeful to find a friendly face with some treats to offer- a mere token exchange but a pact renewed to brighten up each dark corner of the world with a halo of trust, of innocence, of fellowship.

It was a rather lonely walk for the small group, which despair for treats had insisted on prolonging their hollow strikes a little further. The moon had given up its travel, retiring desolately behind a starless dome. But the little pirate girl dragged on, ringing each doorbell with a renewed hope; and when a human face shone in the opening of a door, she smiled largely to show it her grinning fangs, all the while reaching into the bowl of treats to fill her white bag with the sweetness of childhood. 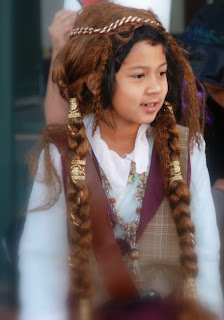 When the group returned, they pooled together all the treats they collected on that lonesome walk: a high pile of bounties, a reflection of the human spirit, a pact renewed and hope in better tomorrow resurfaced.

<< Home
A commitment to write

Mother, Engineer, writer, manager, and more. I am a bit of everything, a creature of God. I am passionate with life. I fear death and its many forms. I love my mind, cherish my body. I express through WORDS.

Behind the Red Curtain: a Memoir